Loewe are a well established and highly regarded manufacturer of television sets and hifi products, having been designing and engineering many ground-breaking innovations for almost 100 years. While renowned worldwide for their impeccable build quality, stunning picture, immersive sound, luxurious design and overall futuristic feel; Loewe has a compelling history as an impacting force behind the development of consumer electronics industry as we know it today. This history is extensive, so I’ve tried to simplify it out to some of the more impacting milestones.

The Loewe Group was founded by two brothers in 1923 in the town of Kronach, Franconia in Germany. Dr. Siegmund Loewe and David Ludwig Loewe began their consumer electronics career with the development of a radio manufacturing company dubbed ‘Radiofrequenz GmBH’. Working with Manfred von Ardenne, a young physicist and inventor, the team combined their knowledge and experience to assemble the ‘triple tube’, first used in the Loewe OE333 radio receiver. This product inspired Loewe’s famous multi-tube production and is considered to be the world’s first integrated circuit. In 1929 company produced their first television model with help and input from British inventor John Logie Baird who is universally regarded as the inventor of the television. This first set was presented to the public by Von Ardenne as the world’s first fully electronic television on the Loewe stand at the 8th annual Berlin Radio Show. Following Hitler’s rise to power in Germany, Siegmund Loewe as a Jewish German citizen was forced to emigrate to the United States of America in 1938, where he met and befriended a like-minded inventor and innovator by the name of Albert Einstein. Although leaving the country, Siegmund refused many offers to sell the company, a resilience and pride that enabled him to reclaim it once the war was over. In 1949, Siegmund Loewe re-took over as chairman of the supervisory board and was able to once again front the industry that he had helped create. In the following decade, Loewe produced the ‘Optaphon’, typically regarded as the first instance of the cassette tape recorder, following onto televisions shortly after.

Dr. Siegmund Loewe passed away in 1962 and the Loewe legacy was taken over by subsidiaries of the Philips Group. Loewe was managed by Philips until 1985, who pushed and advanced the brand as a specialist television manufacturer. During this time, the world saw the release of the Loewe Optaport, the first portable television in 1963, the first Loewe coloured televisions and the release of a fully integrated chassis set, with everything implemented to a single board in 1979. 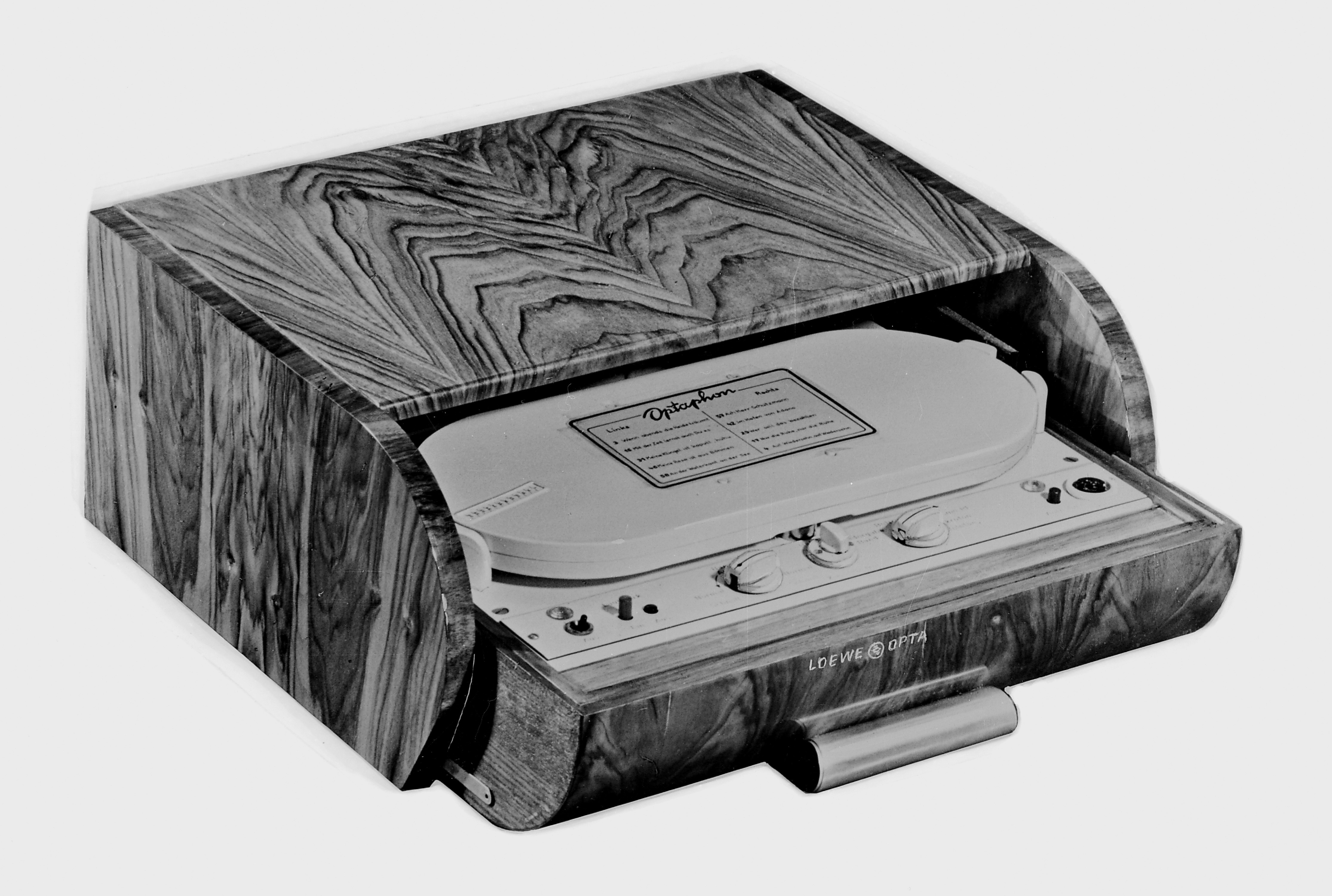 Loewe Optaphon, said to be the first cassette tape recorder.

Philips would later sell their shares, allowing Loewe to return to privately owned status again in 1985. That same year, the company launched the Art 1 which was the first of its kind to focus heavily on design and aesthetic, all the while retaining the advanced Loewe technologies that they had become world-famous for pioneering. 1995 saw the release of the CS1 television, believed to be the first completely recyclable set at the time.

Two further milestones occurred in 1998 with the launch of Xelos, one of the earliest known televisions with internet access, paving the way for smart TVs as we know them today. The other was Spheros, Loewe’s first flat-screen television release. Loewe AG later became a publicly listed company and saw the launch of the ‘Individual’, one of the earliest flat-screen televisions with individual housing options and inset colours.

2010 saw the integration of LED technology with a newer Individual model, with 3D capability being implemented the year after. Loewe sets were now regarded as one of the most aesthetically pleasing ranges on the market, with robust and well-built housing, tempered with a sleek and luxurious aesthetic. Dedicated Loewe galleries in London and other prestigious cities around the world show-case the luxury of Loewe design, as do many show-homes throughout the country.

Following financial hardships in 2013, Loewe were forced to file for bankruptcy and enter a self-administration insolvency process. The company and its assets were saved in 2014, after Loewe management were able to reach an agreement with an investor group of German family-run companies and former Apple and B&O managers, while the Loewe AG assets were taken by Munich-based investor Stargate Capital GmBH. This movement secured the future of the traditional Loewe brand and Siegmund’s original design philosophy in Germany, with the major shareholders being proud German family-run companies who respect and revere the Loewe legacy and have a passion for quality audio and luxury design.

Loewe’s current ranges are a reflection of their long and hard-working past, offering an impeccable picture quality, truly unbeatable sound and the luxurious design that they have perfected over the many years of trading. With the current ranges featuring smart functionality, UHD 4K picture resolution, multiroom capability and onboard storage facilities; the ONE, Art UHD, Connect UHD, Reference UHD and Bild 7 are a team of super-sets, priced at each category of the market with heightened performance and feature capabilities as you climb up the series.