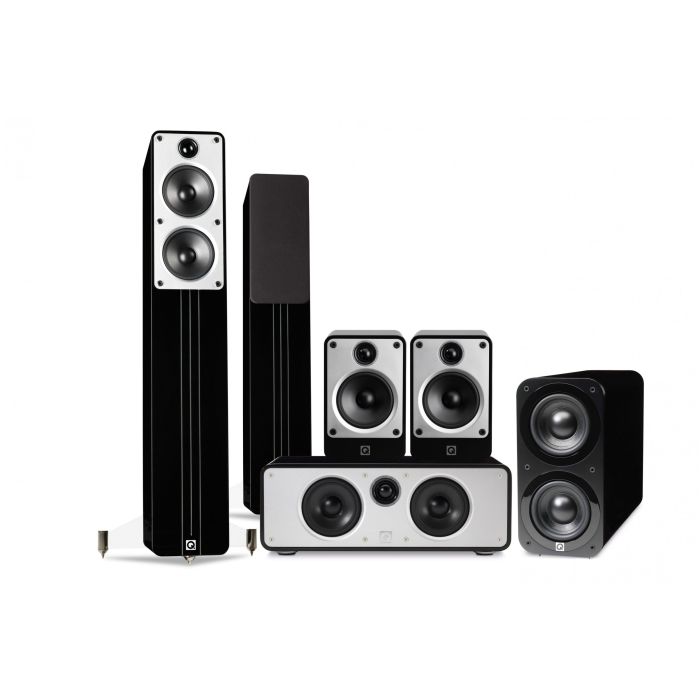 The Q Acoustics Concept Home Theatre Pack has been assembled with the discerning home media enthusiast in mind. Designed and engineered for optimal performance when playing music, films, TV shows, or video games, pairing the Concept package with a quality AV receiver will put you at the very heart and centre of your favourite media with a truly convincing level of realism. A beautifully engaging and highly immersive 5.1 experience.

Q Acoustic's Concept 40 is the speaker company's flagship floorstanding loudspeaker and is the latest addition to the highly regarded and multiple awards winning Concept range. The company have expressed great confidence in the speaker's capability of delivering unsurpassed sonic performance within its price range. These high fidelity loudspeakers are said to set new standards in sound quality and are apparently able to beat competitor models in much higher price-points with ease.

The Concept 40 utilises similar technology to its award-winning predecessor, the Concept 20 - featuring the same unbeatable stereo-field and punchy dynamics thanks to its specially engineered driver units. These exceptional drivers, when used in conjunction of Q Acoustic 'GelcoreTM Construction' technology and ultra-low resonance cabinet, allows the speaker to perform at an optimum level.

This unbeatable sound quality and stylish, compact aesthetics make the Concept 40 an easy integration into your listening room.

Since 2006 Q Acoustics has been designing exceptional and affordable loudspeakers for both music lovers and home cinema enthusiasts. beginning with the 1000 series of bookshelf and floorstanders, Q Acoustics won a series of high profile reviews and group tests - they added a centre channel speaker and subwoofer to create the £500 1000 AV package, which was a budget system of choice for many buyers.

The Q Acoustics Concept bookshelf speakers saw huge success as being one of the most adept models on the market, claiming both awards and the hearts of listeners worldwide. Following this success, Q Acoustics began to develop a Concept series, seeing the addition of the Concept 40 and now the Concept Centre models.

The Concept Centre is designed to highlight the vocal and subtle elements of your film soundtrack while being used in combination with Concept 40 and Concept 20 loudspeakers. The Concept Centre utilises much of the same technology found within the Concept 40 and Concept 20, including the innovative 'Gelcore' cabinet philosophy. The ultimate result is an astonishingly clear and dynamic centre channel, ideal for use within both 5.1 and 7.1 home theatre applications.

The Q Acoustics Concept 20 speaker deliver substantially higher performance than speakers of this price range thanks to the application of revolutionary cabinet technology which significantly reduces vibration. Recently reviewed by What Hi-Fi magazine, the Q Acoustic design received a confident 5-star rating.

High-end sound quality is now available to a much wider audience thanks to the Concept 20 design.

Essentially the Concept 20's are a 2020i speaker in a much better-designed cabinet - in other words, the drive units (paper ceramic coated mid-bass driver and decoupled dome tweeter) and crossover are shared between these two loudspeakers.

A number of design features of the Concept 20 speaker make this product very special indeed. Firstly, the dome tweeter is de-coupled from the front baffle, which benefits stereo separation, pinpoint high-frequency definition and amazing depth of field. Q Acoustics use a material called Gel-Core for the enclosure material - the design is a box within a box, making the overall structure extremely rigid and eliminates almost to zero any vibrations in the box, so you get a much better performance across the entire frequency range, from bass to midrange to high frequencies. The lack of vibration allows the tweeter and mid-bass units to move air accurately without any undue effect from the non-resonant, acoustically dead cabinet.

As well as class-leading drive units and crossover, the beautifully lacquered. Concept 20 cabinet utilises GelcoreTM construction, specifically developed for acoustic enclosures. In effect this is a ‘cabinet within a cabinet’; separated by a special, resonance cancelling compound. This enables the drive units to simply reproduce music, unencumbered by cabinet-induced colouration.

The listening result is nothing short of sensational.

The rear panel mounted connection plate can be wired using a normal twin core speaker cable or a four core speaker cable for bi-wiring or bi-amping. Metal link rods can be added or removed from the 4mm binding posts to switch quickly and easily between the single wire and bi-wire mode. Also on the rear of the cabinet is a bass port - when the bass-midrange driver moves in and out in sympathy with the input signal, a proportion of the air will also flow out of the bass port, giving much deeper bass performance than could be realised from an infinite baffle or sealed box design.

For the very best results, the Concept 20 should be used on its unique dedicated speaker stand, which uses the same GelcoreTM construction technique, further eliminating vibration and therefore offering better stereo imaging and bass depth/ control. Available in either gloss black or gloss white finish.

The 2070i subwoofer from Q Acoustics has been designed to match existing speaker models within the 2000i range, and compliments these loudspeakers flawlessly. The 2070i is an entirely DSP driven system, utilising class amplification. This level of technology is rarely found in subwoofers at such a modest price-point as the 2070i. Q Acoustics have achieved an advanced level of functionality within this subwoofer, as well as being able to truly epitomise the sonic performance of the unit to provide an unbeatable sound. This has been achieved by undertaking all filtering and limiting functions of the subwoofer in an entirely digital domain.

An example of this is the Speaker Type switch. This switch alters and adjusts the characteristics of the subwoofers frequency response at the point of crossover to allow the sub to perform at its best possible sound quality, depending on whether it's being used with ported speakers (like the rest of the 2010 range) or being used with infinite baffle models. The 2070i is often considered one of the best subwoofers within its price-range and integrated perfectly with the Q Acoustics 2000i series.