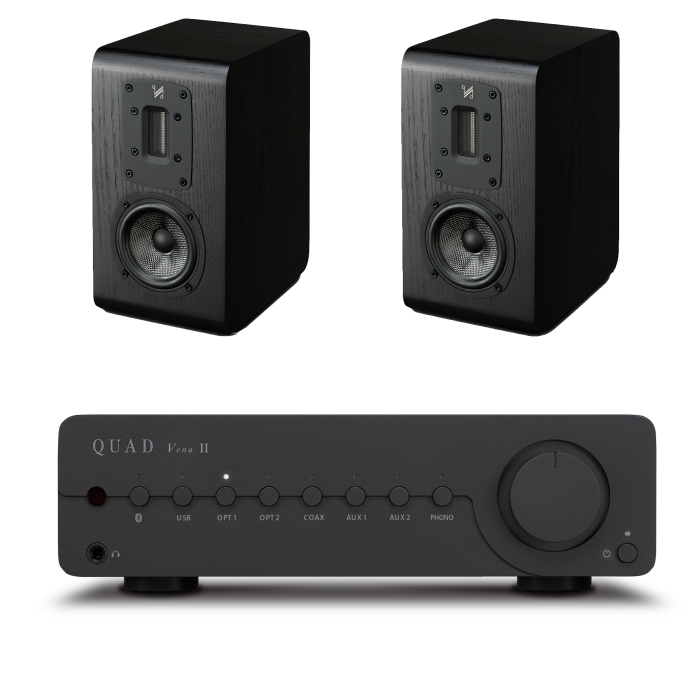 The new Quad Vena II has seen some significant improvements over the old Quad Vena, unlike the old amp, the Vena II sports a Class AB power amp. The power supply has also been upgraded to a new 200VA toroidal transformer lying at the heart of the Amp; this is then followed up by 2x15000uF reservoir capacity (totalling up to 30000uF in total), helping the amp to maintain complete control of the music whilst also enabling excellent dynamic range.

Good news for Vinyl lovers as a built-in phonostage for moving magnet cartridges - a high quality, low noise, JFET-based circuit with precise RIAA equalisation. Not forgetting headphone users. The original Quad Vena included a headphone output, the difference between these two amps is that in the previous version had its headphone output connected to the amps main output stage rather than to a specialised headphone amp circuit like the Vena II has. Another neat feature that the Vena II has is that incorporates a dedicated headphone amp with current-feedback its gain bandwidth and high slew rate delivering a more dynamic, detailed and engaging performance with all manner of headphone types.

The preamp section is primarily kept as simplistic as can be to maintain signal purity, with line input signals passing to a precision analogue volume stage controlled by a precision motorised ALPS potentiometer. Quads engineers have put a huge amount of effort into the physical layout of the Vena II's circuitry, protecting the sensitive preamp from any sort of noise interference. The Quad Vena II has built-in Bluetooth wireless streaming with support from the aptX codec to ensure that easy pairing with all manner of smartphones, tablets, MACs and PCs

Quad's S Series of loudspeaker models are an embodiment of the company's commitment to bringing the listener as close to the performance as possible. Featuring new ribbon design tweeter units, advanced Kevlar bass/midrange drivers and a sophisticated crossover, each S series speaker is able to offer a detailed and dynamic performance to suit your room requirements and budget.

The S-2 is the larger of two stand-mount models in the S series and features a high-quality 125mm bass/midrange driver built from Kevlar. This larger cone means that the S-2 features a more prominent room presence and a more refined level of clarity/punchiness in the lower frequencies than what the S-1 is able to achieve. The S-2 uses the same ribbon tweeter technology as the rest of its brothers, with a sophisticated crossover network ensuring that the main driver and tweeter are talking together as they should.

Quad is a widely renowned name within the world of hifi, having developed some of the most adept and highly regarded loudspeakers and electronics on the market for the past 75 years. Marking the 79th year of Quad's operation is a brand new loudspeaker series, dubbed 'the S Series'. Each model features advanced Kevlar bass/midrange drivers, working in unison with a specially developed ribbon tweeter. This configuration, alongside the intricate way that Quad have put these components together, tempered with a glorious cabinet design - makes for a seriously impressive range of speakers, more than worthy of being the patron products to mark Quad's 79 years.