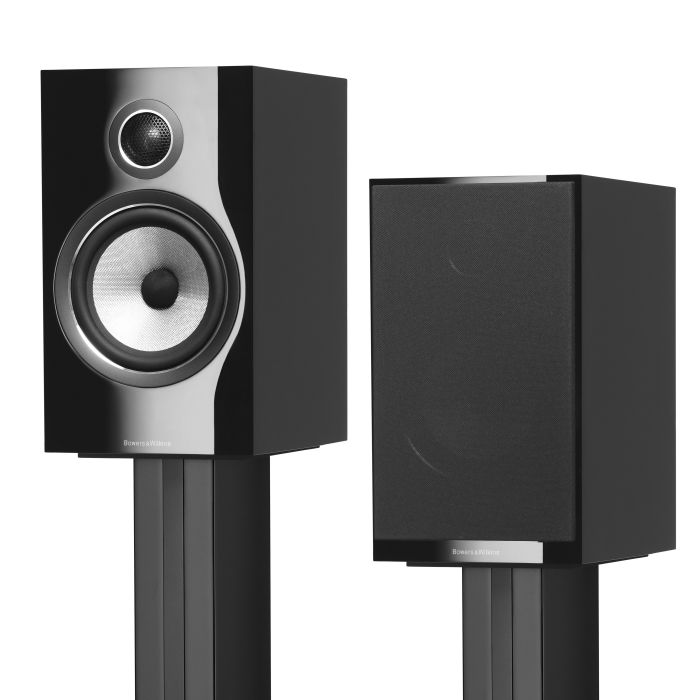 The Bowers and Wilkins 706 S2 Loudspeakers

The 706 is the entry-level larger stand-mount speaker in the series, seated between the compact bookshelf 707 and the tweeter-on-top 705 models. The 706 is a 2-way vented loudspeaker, featuring a Continuum bass/midrange woofer 165mm in size and a 25mm carbon-coated dome tweeter to offer a superlative sound quality, ideal for larger listening environments.

Bowers & Wilkins are a company who needs a very little introduction, having been constructing some of the world's most critically acclaimed loudspeaker and headphone models for half of a decade. Starting at the entry-level 600 S2 series, through to the 700 S2 high-end series and up to 800 Diamond series and flagship Nautilus model. These different series of loudspeaker have been praised as the superior listening experience in both two-channel hifi/music listening and in multi-channel home theatre applications, having claimed a vast multitude of awards in both categories. A Bowers speaker can be easily recognised by the signature yellow Aramid Fibre midrange cone, which can be found with their 600 and CM series with the 800 Series opting for a silver 'continuum' cone.

Bowers & Wilkins' highly acclaimed CM series was one of the company's most important loudspeaker ranges. Combining elegant design with outstanding sonic performance and available in a range of luxurious finishes, CM was positively received by the masses at both consumer-level and by critics and reviews. The 700 S2 series builds upon the exceptionally high standard set by CM and raises the bar higher than ever as a class-leading range of audiophile loudspeakers.

While the 700 series follows a similar model structure and physical profile as CM, both the sound and general appearance of the range has seen significant improvement. While the double-decoupled dome equipped by CM was arguably one of the best tweeter advances of its time, Bowers & Wilkins have trickled down technology from their flagship Diamond series in the high-frequency driver of the new 700 range to enhance this outstanding sound quality while sitting it at a more accessible price-point. While the Diamond range tweeter uses a synthetic diamond coating design, the 700 series features a state-of-the-art carbon dome variant of this, specifically designed for the 700 models. This design allows for a highly rigid yet lightweight tweeter construction, resulting in a life-like and detailed high-frequency response, spread across a gloriously vast and accurate stereo image.

One immediately noticeable difference is the replacement of Bowers & Wilkins' signature yellow Aramid mid/bass units with a silver shaded 'Continuum' woofer. Kevlar is a great material, highly rigid and extremely light, meaning that vast amounts of air can be pushed at speed with precision and accuracy to result in a punchy and dynamic sound. Bowers & Wilkins' state-of-the-art Continuum material follows this basic principle but vastly improves upon these characteristics to form a faster, more rigid, better-sounding bass/midrange response than was previously possible. This technology was first developed and implemented in the company's flagship 800 diamond series. The larger three-way models in the 700 series make use of intelligent aerofoil profile bass cones for a tighter, clearer and more engaging bass response.

All of this intricate and highly developed technology is embodied within elegant, beautifully finished cabinets that are reminiscent of their predecessors in the CM series, but also feature new aesthetic details such as trim rings, tweeter bodies and tweeter grille mesh structures. The 700 S2 series is available in gloss black, satin white and rosenut finishes.