Please call or email for the latest stock information
£2,999.00
Skip to the end of the images gallery 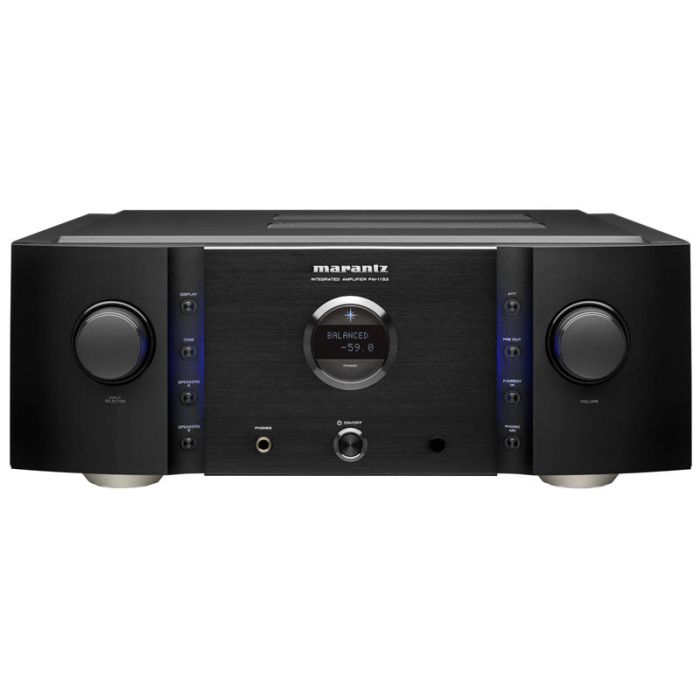 The Marantz PM-11S3 continues the reference level sound quality of it's ancestors, replacing the PM-11S2. The perfect matching CD/ SACD player is the SA-11S3, or for those audiophiles who have music files stored on their home network, the ideal partner is the NA-11S1 network music player - either of these combinations offers the ultimate in stereo music performance for the audio enthusiast who is demanding the best of the best. The combinations of player and amplifier have been designed to work together to deliver the maximum musical performance, but of course each product can be used in tandem with third party components if desired.

When you lift the PM11S3, you will notice that this is not any ordinary amplifier - with it's 27kg it's a rather heavy device. The chassis and enclosure has a rock solid construction, a massive 5mm thick top plate and a double layered bottom - this is done to prevent distortion from mechanical vibrations outside - also vibrations for the inside, for instance from the power transformer are suppressed because of these rigid, heavy materials. The entire chassis is copper plated - the advantage of copper is that it conducts electricity extremely well - by plating the entire chassis in copper, the chassis conducts electricity so well that every part of the chassis can be grounded effectively, which prevents any noise entering the signal path from the ground connection. Also noise from external devices is prevented from entering the chassis and disturbing the audio signal path.

The input stage is where all input signals enter the PM11S3, for example from your SACD player, turntable and network player - the input stage has a pre-amplifier with volume control adjustment, which amplifies the low level input signals to prepare them for the power amplifier stage. The preamplifier contains the famous HDAM module (Hyper Dynamic Amplifier Module), a Marantz exclusive development known for it's phenomenal audio quality. The HDAM is built from discrete components including transistors, diodes, capacitors and resistors - no integrated circuits are applied. Different versions of the HDAM are designed for different applications, in the preamplifier of the PM11S3 the HDAM SA2 is applied. On comparison to standard op-amps, the HDAM is extremely fast, significantly faster than a standard op-amp - speed is important when in an instant, a great deal of power is needed, for example during musical peaks. Noise generated by the HDAM is virtually zero, preserving the quality of the music signal - there are op-amps available with low noise, but they are slow to respond to musical peaks. Marantz engineers custom design the HDAM using only those discrete components know to sound completely transparent, which enhances the overall performance of the PM11S3 - this is not possible when designing circuits with op-amps, since many components are already chosen by the chip manufacturer in the silicon die of the op-amp.

For the connection of a moving magnet or moving coil cartridge equipped turntable, the preamplifier section also includes a dedicated phono equaliser. Constant current feedback technology is employed, giving very low phase shift over the audio frequencies, plus very fast response to musical transients, and is a very good match to any phono cartridge on the market.

The dedicated input stage power supply section is totally separate from the output power stage power supply, helping to keep input and output sections totally isolated from each other, which minimises noise and distortion, keeping the precious audio signal as pure as possible.

Very large custom designed reservoir capacitors are employed in this power supply -  these capacitors store electrical energy, and the larger their capacitance, the more energy they can stored - the two 15,000uF reservoir capacitors ensure that during musical crescendos, power can be released in an instant when needed, which enables the amplifier to deliver dynamic, powerful audio in response to the ever changing music signal.

The next two sections contain the left and right channel power amplifiers, which are again separated from each other using electromagnetic shielding to eliminate crosstalk between the channels - the power amplifiers amplify the current and voltage of the preamplifier audio signal to a level strong enough to drive a loudspeaker. The power amplifiers employ the HDAM SA3 technology together with current feedback, which gives a much faster response than the more common voltage feedback technique. The current capability of this latest version of the PM11S3 is even greater than before, enabling it to drive low impedance loudspeakers to high levels with ease - each amplifier can deliver up to 100W into an 8 ohm load, but also 200W into a 4 ohm load, meaning that the amplifier is linear - it delivers twice the output power when the load is halved - almost all other amplifiers on the market would deliver below 200W into the 4 ohm load, so this is an exceptional performance from the PM11S3. To keep the amplifier temperature stable under all operating conditions, the PM11 S3 is fitted with a very efficient and large aluminium finned heatsink - in this way high power can be delivered for longer periods with no detriment to reliability.

The power supply for the two power amplifiers occupies the next two sections, comprising a high VA rated toroidal transformer with low impedance secondary windings and a very low electromagnetic leakage in one section, and two 22000uF reservoir capacitors with diode bridge rectifiers in the second section. The benefits of the toroidal transformer over the more common laminated core type are:-

The speaker output terminals are Marantz's high quality copper design, with two pairs for each channel for speakers A and speakers B - speakers A is used to connect your main loudspeakers, and speakers B can be used to connect a second pair of speakers in another room. If you only have one pair of speakers, the terminals can also be used to bi-wire your main loudspeakers. The rear panel switch for all of these setups should be set to 'stereo' which is the default setting. Bi-amping can be achieved by setting the switch to the alternative 'bi-amp' setting, and then using the FCBS bus(floating control bus system) to connect a second PM11S3 with each PM11S3 controlling only one speaker - one pair of speaker terminals drives the tweeter, and the other pair drives the bass drivers. One PM11 becomes the master volume for the other, with the other being a slave. A 5.1 home cinema surround system can be created in this way using three PM11's, one for the front left and right speakers, one for the centre channel speaker, and a third for the surround speakers - in this case the rear panel switch needs to be set to stereo. This setup, in combination with a high end AV preamplifier such as Marantz AV8801, a truly high-end surround sound system can be created.

Ease of use has taken a step forward since the introduction of the Marantz NA11-S1 network player - when combined with the PM11S3 and the remote bus connection is made between both units, a new Marantz app allows iOs and Android hand held devices to control every aspect of operation.

The PM11S3 is now available in both champagne or black finishes