* Please note, We are no longer able to carry out repairs on Hifi equipment. This blog is meant as a rough guide and Hifi Gear takes no responsibility for damage to equipment when following this guide. For repair work, we recommend finding a local Hifi repair agent. *

An elderly, but still sought after Marantz CD63SE was bought into the shop last week, with the fault reported that CD's would no longer play. After approximately 15 years of use, this is a common situation, as the laser power will gradually reduce over time to the point where it can no longer focus reliably on the spinning CD disc - however with the easy availability of VAM1202 CD mechanisms for below £20, the repair is a viable option over and above the purchase of a new CD player. 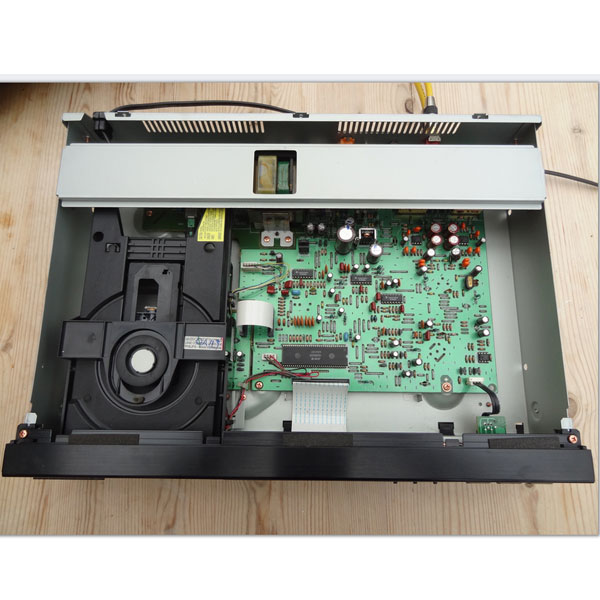 The original Philips CDM12.1 laser mech is no longer available, however the VAM1202 is an approved drop in replacement - how often have I heard those three words only to find out there are complications? Well, this repair went pretty smoothly, but as always there were a few unexpected complications which I'll get on to later.

With thousands of Marantz CD63/ CD63SE/CD63KI Signature CD players still in regular use or turning up on eBay as 'spares or repairs' for a very low sum, I thought it would be useful to would-be DIY'ers to have a step by step guide to removing, replacing and aligning a replacement VAM1201 laser transport in the CD63 and varients. So, without further ado, get your anti-static wristbands on, and fire up that soldering iron! (Note: only those readers with electrical and electronic experience should attempt to service the CD63 - there are lethal AC mains voltages in the power supply which could kill if touched. All dis-assembly and re-assembly of the CD player should be conducted with the mains plug removed from the mains socket.)

OK, scary bit over! On with the repairs.... firstly, make sure your anti-static wristband is attached to your wrist, as ESD damage can easily affect the sensitive laser mechanism.

After removing the steel lid  (four copper screws either side of the lid, and two copper screws in the top lip of the back panel) with the front of the CD player facing you, you will see the CDM12.1 CD transport to the left hand side, as in the picture above.

The CD12.1 laser mechanism is connected to the main PCB via three cables/ plugs, highlighted in red in the picture below - the smaller white plastic plugs can be removed by gently pulling them out of their sockets (do NOT pull on the wires, put all force on the white plastic connectors. 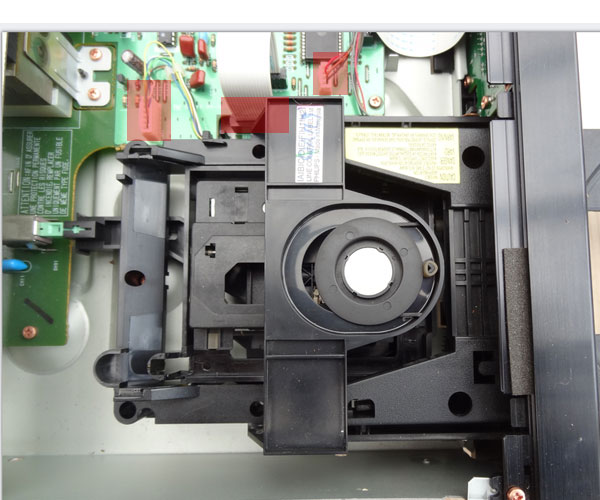 The flexi-foil is removed from it's black plastic socket by firstly lifting the black collar of the socket nearest the CD mechanism, and then gently pulling the flexi-foil out of it's socket, as illustrated in the next two photos. 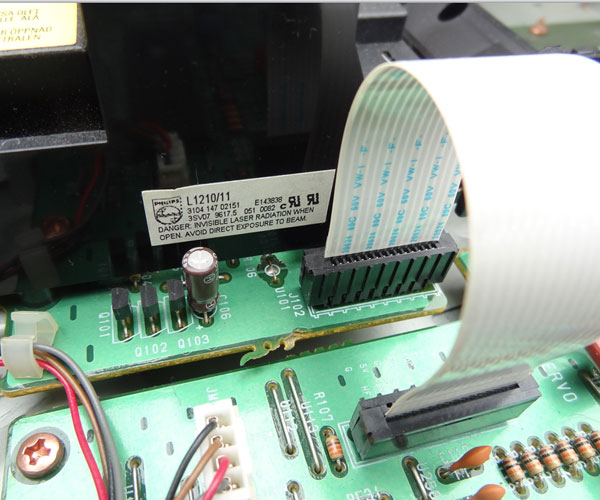 Here is a pic of the flexi-foil successfully released - as you can imaging, it is very easy to damage if due care is not taken. 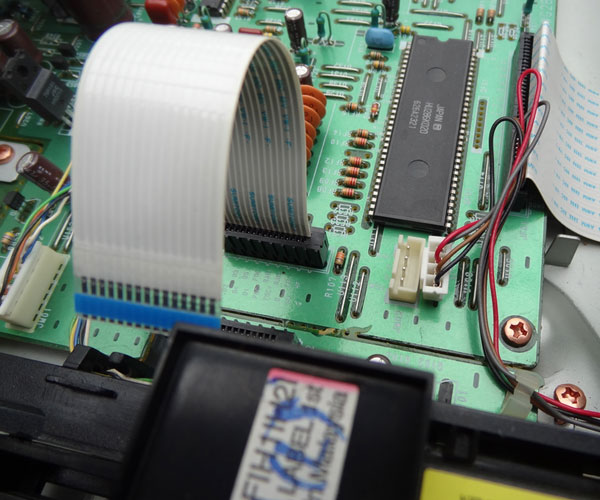 This next photo shows the motor control wiring plug disconnected from it's socket on the main PCB - there are two motors on the VAM1202, one for moving the laser sled as it traverses the CD whilst playing (blue and white wires), and another to spin the CD disc at the correct speed to allow the playing of CD's (green and orange wires). The brown and black wires are connected to a sensor which detects when a CD is loaded and gives a true or false signal to microprocessor on the main CD player PCB. 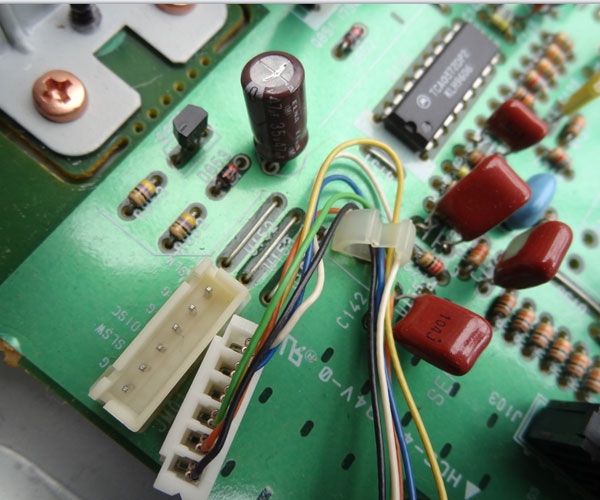 At this stage, it is a good idea to remove the CD loading tray, which makes it much easier to extract the CD mechanism from the player. As shown in the photo below, eject the CD drawer fully, then locate the rectangular hole, and with a flat blade screwdriver, carefully release the plastic tab which secures the CD tray. Put the CD tray safely to one side for later. 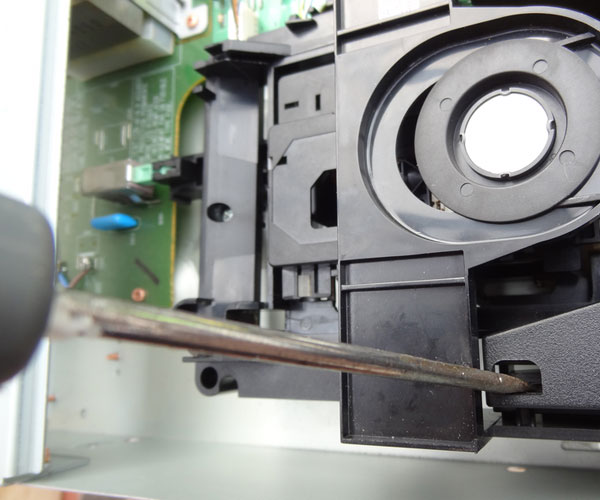 Once all three sets of cables have been removed between the CD laser mechanism and the main PCB, simply unscrew the three copper pozidrive screws (highlighted in red below) which retain the CD mechanism to the CD player enclosure floor, and retain them somewhere safe when re-assembly is due. 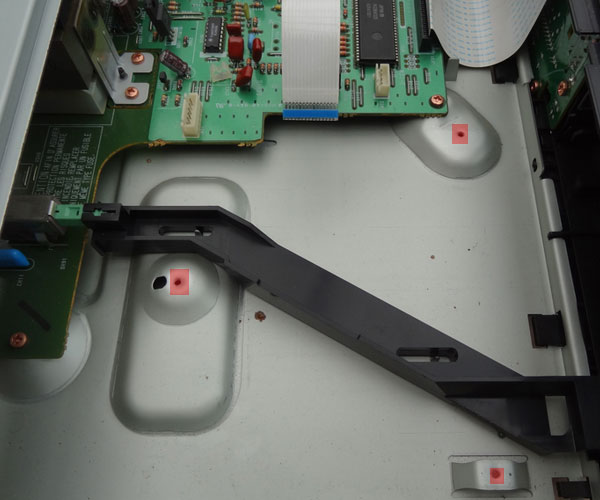 Now that the CD transport is removed from the CD player, carefully place it on your workbench and invert it, so that you can see all of the soldered connections to the various motors and sensor. First of all, release the white collar of the socket which connects to the brown flexi-foil connector and gently pull the flexi-foil out of it's socket. Make sure you are still wearing your anti-static wristband. 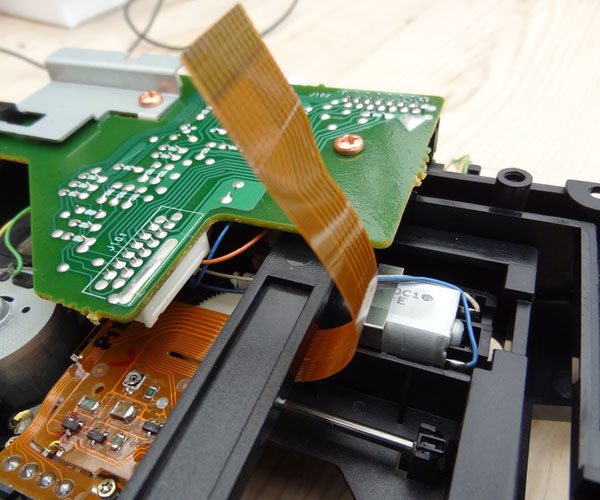 The next job is to remove the two copper screws highlighted in red below, to allow release of the RF amplifier PCB and it's small metal retaining bracket. 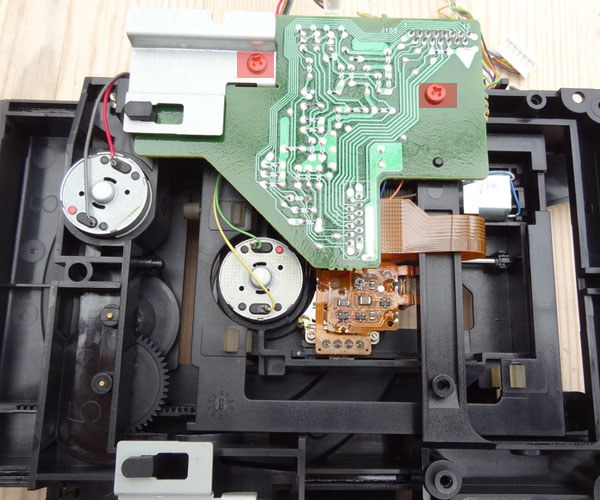 Lift away the RF amplifier PCB (leaving the red/ black/ brown/ grey wires attached as shown in the pic) - you now need to desolder the six connections highlighted below in red which connect to the spindle motor (yellow/ green), the sled motor (blue/ white) and CD sensor (orange/ black). Be careful to use a moderate temperature on your soldering iron, as the wires are easily damaged by excess heat. Note down where the various coloured wires are connected, to aid fitting of the replacement laser mechanism. 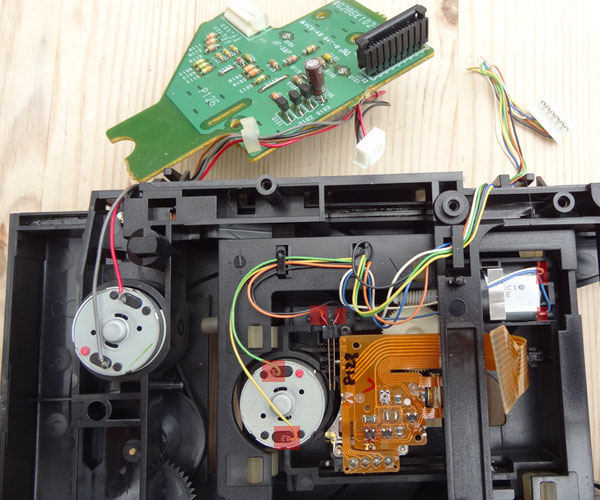 In this next pic you can see the motor spindle and CD present sensor wires carefully desoldered, without any heat damage having occurred. 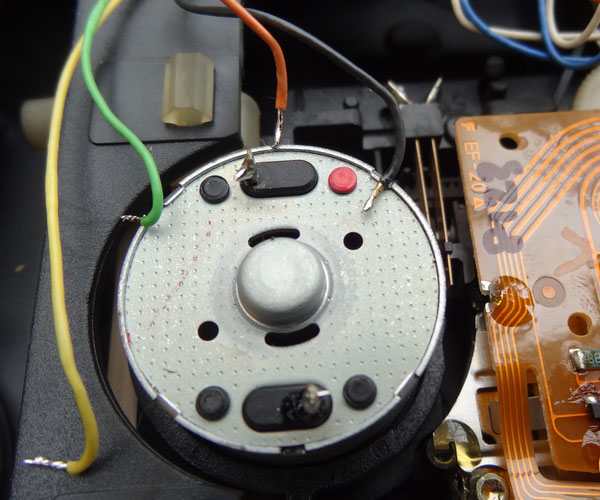 To remove the old CD laser mechanism from the transport, it is necessary to push out the four rubber mechanical suspension points from the laser mech - there are two near the spindle as shown in red here, and then two more - one at the back and one on the side of the laser mech - they are easily split by too much force, so take your time, a flat bladed screwdriver helps to persuade them out. Once all four are released, the old laser mech can be removed completely. 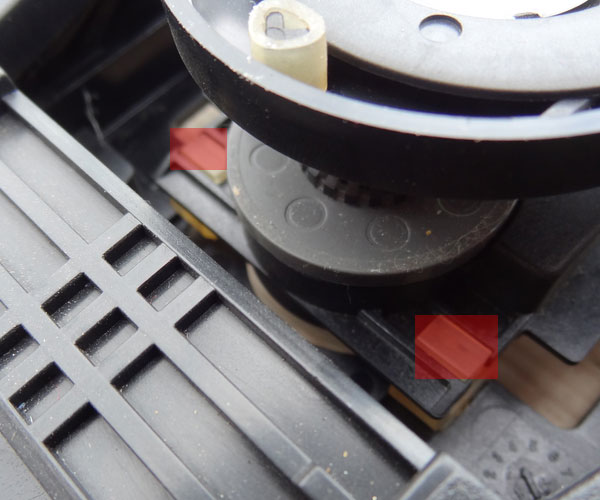 Here are the two spindle suspension points now uncoupled - just repeat the same with the remaining two couplers at back and side. 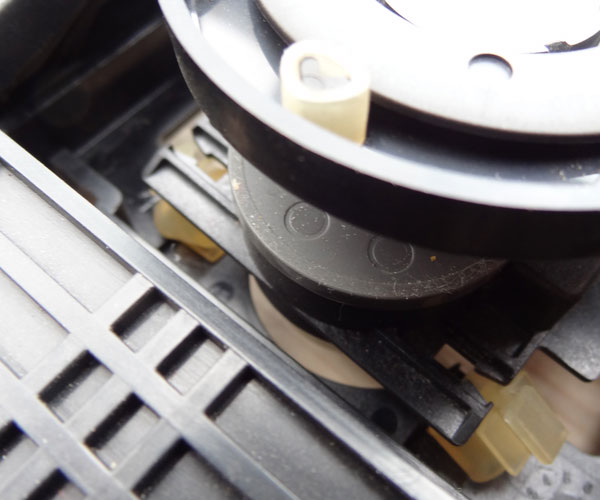 Now it is time to fit our brand new VAM1202 laser mechanism - we purchased this new VAM1202 from a reliable source on eBay - check their feedback before committing yourself. Two things of note - firstly, ensure you take full anti-static precautions when handling the VAM1202 - secondly leave the shorting clip on the flexi-foil until the last possible stage of the re-assembly process. 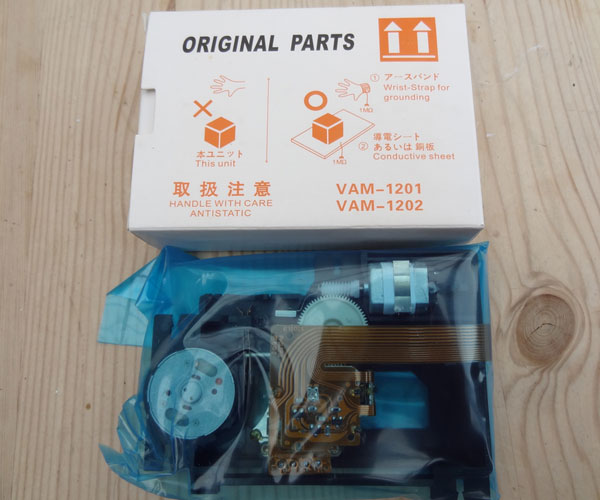 New VAM1202 laser module waiting to be fitted to CD63SE

Just before we fit the new laser mech, it is interesting to compare the original CDM12.1 (top of picture) with the new VAM1202 (bottom of picture). Both share a common black moulded plastic chassis, the spindle motors look identical, but the sled motor is significantly smaller. The flexi-foil PCB shows some subtle differences too, however they are interchangeable so we need not worry further! 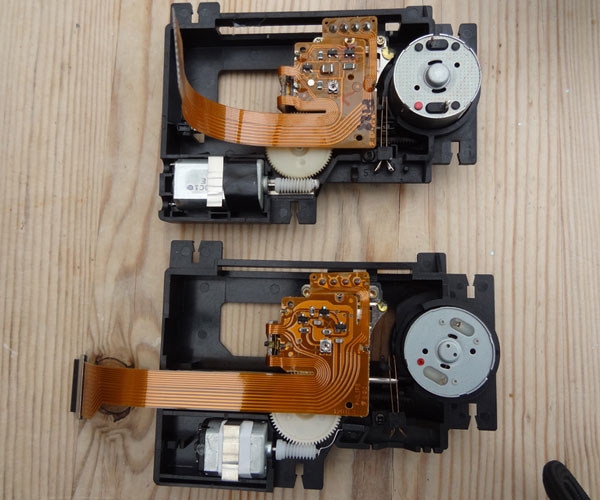 The first job in installing the VAM1202 is to attach the four rubber suspension points, so that the VAM1202 becomes at one with the CD mechanism. The pic below shows the rear edge rubber mount now firmly seated. 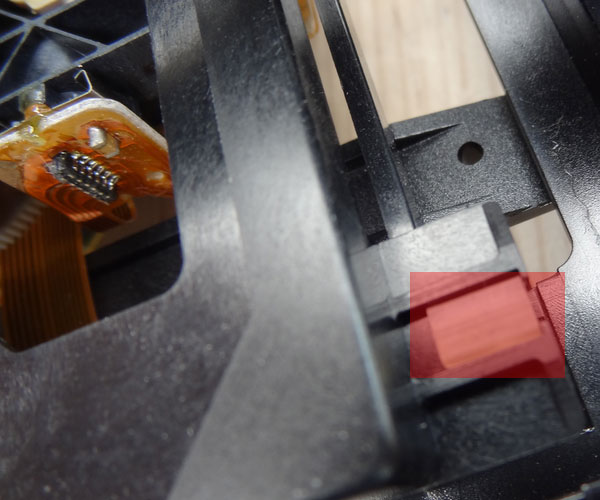 Attaching the rubber suspension points to the VAM1202

Now it is time to re-solder the six wires to the spindle motor (yellow/ green), the CD present sensor (orange/ black) and the sled motor (blue white) as shown below. 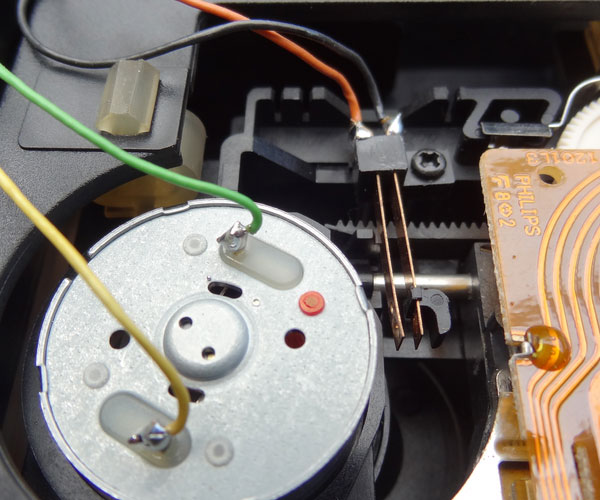 Re-soldering the motor control wiring to the VAM1202 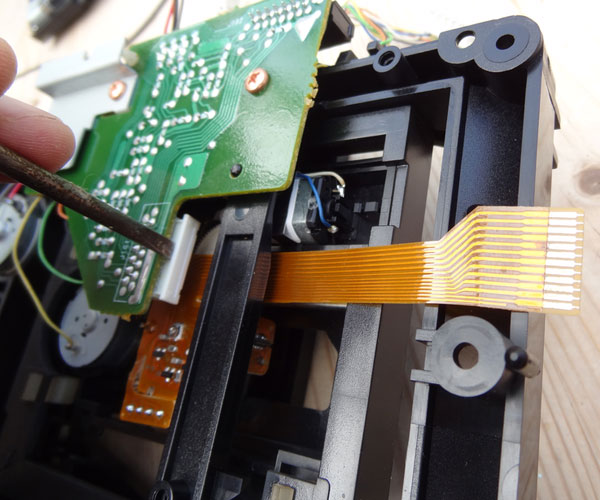 Fitting the VAM1202 flexi-foil into it's connector

Here is a detail pic of the VAM1202 flexi-foil correctly in-place in it's socket. Take time to achieve a proper fit, we don't want intermittent connections here! Also, note the tiny potentiometer highlighted in red. 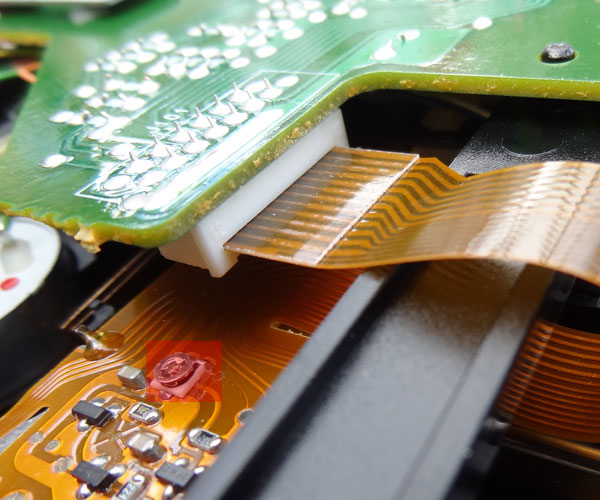 Although the VAM1202 is aligned at the factory, you may find that you need to finely adjust the laser current flowing to achieve perfectly reliable CD table of contents reading and CD track playing. This was one of the slightly unexpected problems I encountered when testing the fully fitted VAM1202. One small but useful modification I made to the customers CD63SE was to drill a small hole in the base of the metal chassis of the player to allow adjustment of the potentiometer without needing to strip down the mechanism to make any adjustments. A small rubber bung finished off this modification tidily. 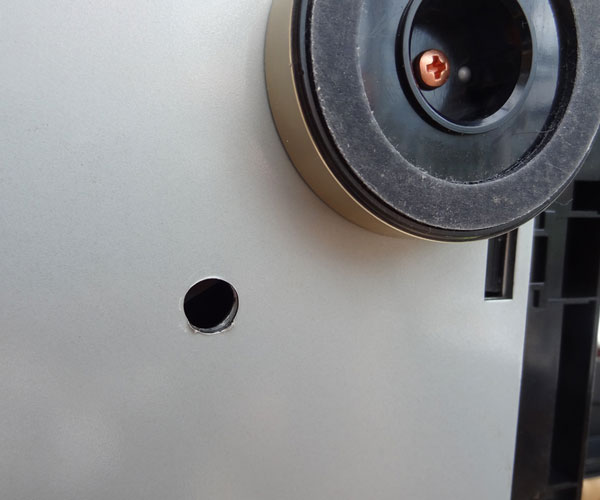 You can now re-position the completed CD transport back into place in the CD player chassis, using the three copper self-tapping screws to fix it in place. The flexi-foil can be reconnected to it's socket, as can the motor control plug and loading control plug, both on the main PCB. 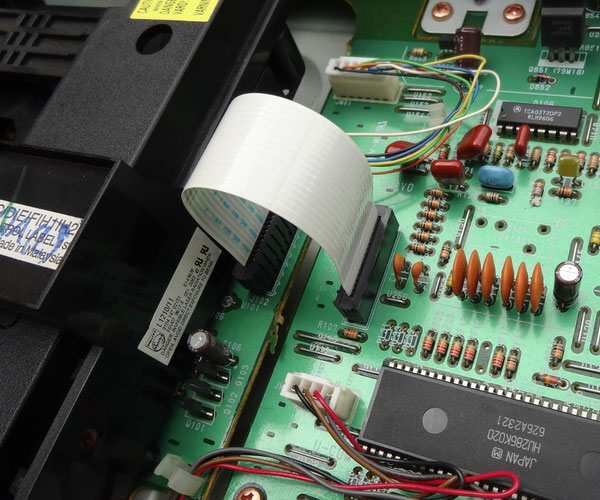 Now it is time to test the finished repair by loading a CD and seeing if you can read the TOC (table of contents) and then play the CD. Don't worry too much if the CD does not spin, it may be that you need to adjust that potentiometer on the back of the laser flexi0foil slightly. Hopefully you will be playing a CD within a few seconds... 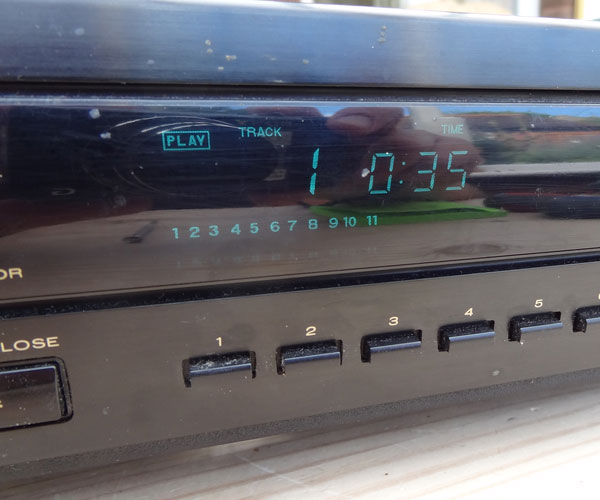 Our repair has been a success!

I hope you have found this 'how to' post interesting and easy to understand, and that you give your Marantz CD63SE ( or CD63/67) a new lease of life, for just a £20 investment and a few hours of your time. 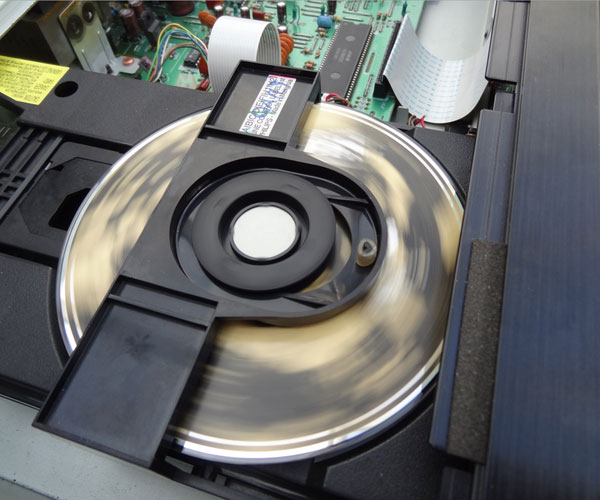 Marantz CD63SE playing it's first CD with the VAM1202
← Previous Next →
3 Comment(s)
Dominic
Thank you for this article. I just replaced the CDM12.1 transport (not the VAM1202) myself and this article really helped me a lot. CDM12.1 is rare but still available at a slightly higher price (about US$40). The most distinct difference is a bigger motor. It sometimes also comes with the wires attached, eliminating the need for any soldering job.
Reply
Michael
Thank you - worked fine :)
Reply
Keith Hinks
Hi
Just wondering if you could tell me where the centre point of the 5mm drill hole is marked on the baseplate to allow access to the adjustment ?
Reply
FREE UK DELIVERY ON ORDERS OVER £100